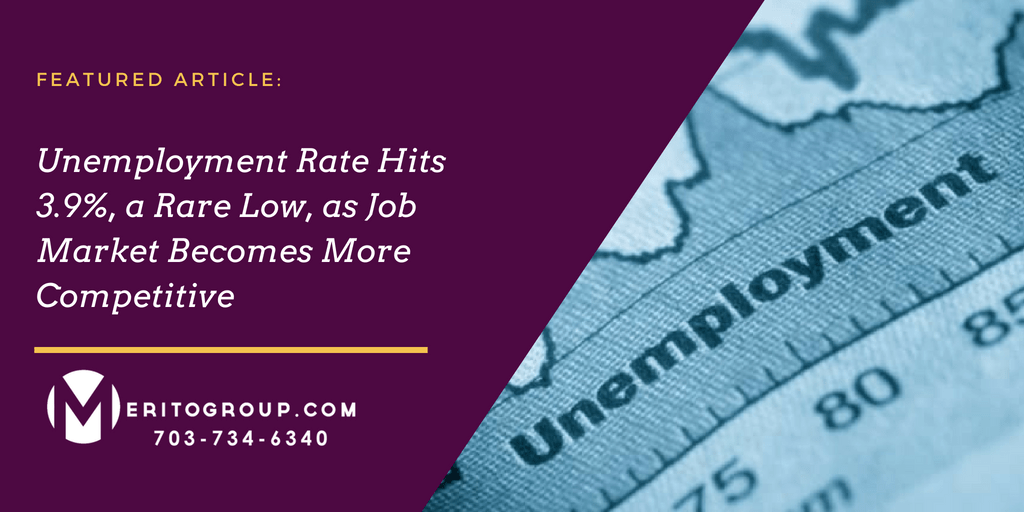 The Merito Group is a boutique woman-owned recruitment firm based in the D.C. metro area. We are dedicated to working with candidates to place them in their career as a strategic partner. Recently, the Labor Department released its April hiring and unemployment report, providing the latest snapshot of the economy.

■ The unemployment rate was 3.9 percent, the lowest rate since 2000 and a sign that the job market has become even more competitive. It had been 4.1 percent since October.

■ 164,000 jobs were added last month. Wall Street economists had expected an increase of about 193,000, according to Bloomberg.

■ The Labor Department revised the job figures for February slightly downward, but revised the numbers for March sharply upward. The result was a net increase of 30,000 jobs, compared with previous estimates.

Source: Bureau of Labor Statistics
■ Average earnings rose by 4 cents an hour last month and are up 2.6 percent over the past year.

American employers continue to find reasons to expand their payrolls. April marked the 91st consecutive month of job gains, far and away the longest streak of increases on record. The average monthly gain has declined each year since 2014, but that’s normal for an economy that’s been in recovery for such an extended period.

“We’ve continued to add jobs routinely every month for so long, and the unemployment rate we have reached is amazing,” said Catherine Barrera chief economist of the online job site ZipRecruiter. “It’s very incredible.”

The drop in the unemployment rate may be partly explained by a contraction in the labor force last month. Still, the jobless rate is reaching historically low levels. In the last 60 years, there has been only one sustained period where unemployment stayed below 4 percent: the late 1960s.

Ms. Barrera said it was too early to worry about whether the economy is overheating. When the jobless rate hit these levels right before the dot-com bubble burst, the labor-force participation rate was significantly higher than it is today.