Children Benefit From Having A Working Mom 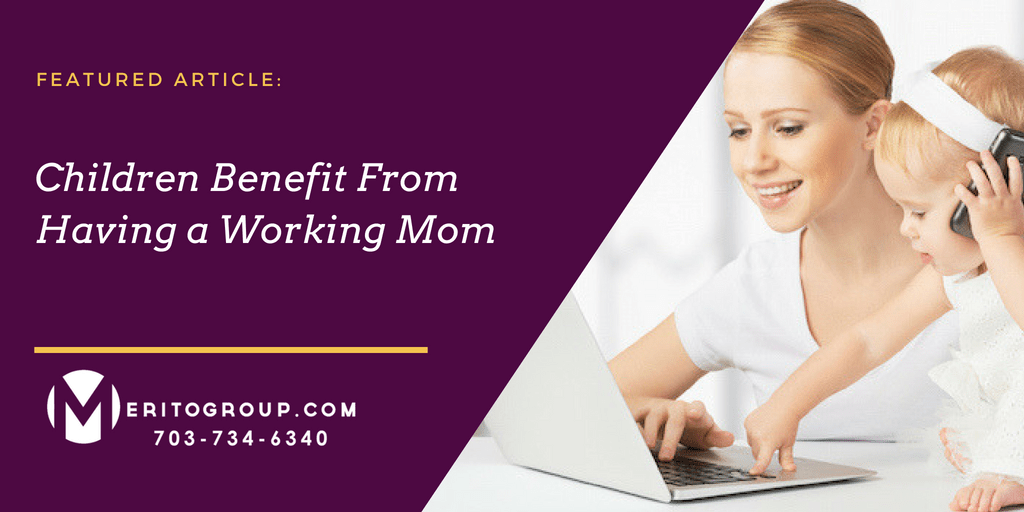 We at Merito Group hope that everyone had a lovely Mother’s Day yesterday. As a woman owned business, we are dedicated to helping everyone find their dream career, and are aware of the challenges working mothers face. Here’s some heartening news for working mothers worried about the future of their children.

The findings are stark, and they hold true across 24 countries.

“There are very few things, that we know of, that have such a clear effect on gender inequality as being raised by a working mother,” says Kathleen L. McGinn, the Cahners-Rabb Professor of Business Administration at Harvard Business School, who conducted the study with Mayra Ruiz Castro, a researcher at HBS, and Elizabeth Long Lingo, an embedded practitioner at Mt. Holyoke College.

“THERE ARE VERY FEW THINGS…THAT HAVE SUCH A CLEAR EFFECT ON GENDER INEQUALITY AS BEING RAISED BY A WORKING MOTHER.”

McGinn’s previous research, with Katherine Milkman of Wharton Business School, found that female attorneys are more likely to rise through the ranks of a firm (and less likely to leave) when they have female partners as mentors and role models. McGinn, Castro, and Lingo wondered how nontraditional role models influenced gender inequality at home—both in terms of professional opportunities and household responsibilities.

To gauge the global effect of working moms, the researchers dug into data from the International Social Survey Program, a global consortium of organizations that conduct social science research, and studied 2002 and 2012 responses to a survey called “Family and Changing Gender Roles.” They supplemented these data with data on employment opportunities and gender inequality across countries.
To read more on Carmen Nobel‘s fascinating article from the Harvard Business Review, please click here.
Merito Group is a small women-owned business providing excellence in outsourced talent acquisition solutions including retained executive search, RPO, and consulting services. Looking to hire exceptional talent? Contact us by email or 703-734-6340. To view our current career opportunities click here.